Angel Contreras: Drawing and Loving Every Minute of It!

Angel Contreras: Drawing and Loving Every Minute of It! 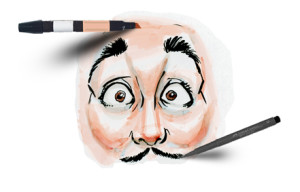 Angel Contreras, entertainer and owner of Angel’s Artistic Endeavors, Inc., describes what he does as “going to parties all the time, making fun of people and getting paid for it!”

Perhaps best known for his caricatures and his clownicatures specifically (visitwww.art4clowns.com), Contreras has been drawing professionally since 1988, then began drawing for other entertainers in the mid-90’s. He met his first clown, face-to-face, only about ten years ago while they were working a company picnic. “His name was Ziggy and he was not a lipstick clown. He was pristine and I was enamored,” he said. Upon being handed a caricature of himself, Ziggy invited Contreras to his clown alley to do clown coloring sheets. “I went to their alley and it was bananas!” he exclaimed. “It was about 25 middle-age to old people gathered at Dorothy Miller’s house.” They were having such a good time, he was attracted to the whole clowning idea even more.

One thing led to another and Contreras found himself at clowning conventions doing dealer shows, drawing caricatures, and at Clown Campä where, with the help of others, he was able to develop his clown character, Mr. Angel, as well as a show. In fact, the Art 4 Clowns is the part of his business that deals specifically with clown-related items such as coloring sheets, buttons, notepads and stickers. He will also draw custom illustrations for you if you send him a clear photograph. The custom illustrations can be used for a wide variety of self-promotional purposes like on flyers, business cards and your website, in addition to the before mentioned options.

These days sees Contreras busy with regular caricature gigs for private and corporate events, as well as exhibiting and even instructing others in the art of cartooning at clowning conventions.

How does Contreras stay motivated? “I gotta eat!“ he said. Actually, he said he keeps motivated because he is doing something he loves; He gets to entertain people then go home and see the faces of his kids, he said.

Suggestions for newbie caricaturists? “Stay out of my territory! Just kidding! Change it up. Get your skills honed. Talk,” he said, reminded of Groucho Marx’s style when he hosted ‘You Bet Your Life’. “Learn to entertain. Get a lot of education in that regard. Be able to communicate with the customers while they are waiting.”