As a lover of Hawaiiana for over 25 years I can’t help but notice some Hawaiian references in recent pop culture. What is it all about? I’ll share my findings shortly, but first a bit about my hula background:

(WARNING: mini history lesson to come!)
In what seems a lifetime ago, I was a print journalism and cultural anthropology double major and it was then, in college, when I was exposed to the Hawaiian culture. I was introduced to an entertainment group that produced Polynesian revue shows, so I learned about the cultures of Hawaii, Samoa, Tahiti and New Zealand (Maori). I ended up performing with the group for about 15 years.

Naturally, we performed many dances that were purely entertainment and expected, that is to say, we performed the grass-skirted hula dances that had the hapa haole (half white) sound. Much of the music was from the late 1800s to the mid 1900s and was a combination of traditional Hawaiian music and ragtime….Hawaiian War Chant, Grass Shack, Brown Gal, etc. I felt something of a kinship to these hapa haole songs because I am also half-white.

Now from the late 1800’s through the turn of the century, many people, Hawaiian and non-Hawaiian, thought this new style of music, the hapa haole style, was a lowering or degradation of traditional Hawaiian music and culture, however it was very popular with tourists, thus becoming a highly regarded commercial entity in the form of popular hula dancing shows and revues.

Go to any hula show today at your typical Mainland ‘luau’ event and you will hear these kinds of songs. Sometimes I had difficulty performing the hapa haole dances because I felt it was’t being true to the culture. And isn’t that the challenge of every indigenous culture now? How do they develop and ecourage cultural awareness in others while maintaining their identity? But I found, in my case, it was through that very road into pop culture that the ancient Hawaiian culture appeared.

So, not only did I learn these hapa haole hula dances, but they brought me deeper into the Hawaiian culture where I also learned about the ancient styles, hula kahiko, and others and I was fortunate enough to be able to take classes with world reknown kumu hula, hula teachers, when they would visit the Mainland.

In fact, my deep love of Hawaiiana began when I learned the very meaning of Aloha…
Which means ‘to face (alo) the breath of life (ha)’. How absolutely divine is that?
And I learned the complexity and multiple meanings of that word.
And I never would have met and fallen in love with the beauty of this ancient culture were it not for some brown gal wearing a grass skirt!

Now for the Hawaiian references I’ve been noticing. Over the years more and more Hawaiiana has been making its way into pop culture. Musician and singer IZ (passed away in 97 or so), the animated Lilo & Stitch, to name just a couple, not to mention reality shows based in Hawaii, like Dog the Bounty Hunter and Maui Fever.

2) American Girl Doll’s “Girl of the Year” is the Aloha Kanani doll. Only available this year.
“She helps others by sharing Hawaii’s Aloha spirit.” 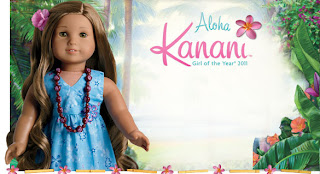 3) Pixar is creating a 6-minute short titled “Toy Story:﻿ Hawaiian Vacation” to be shown before Cars 2. Set for a June release.
No, the toy box friends aren’t going to go to Hawaii. Darn! 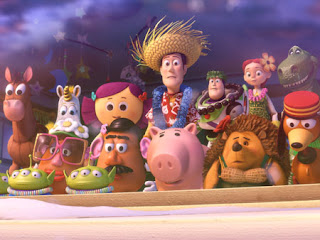 Barbie & Ken think they’re going off to a tropical vacation by hiding in Bonnie’s backpack. Alas, they never make it out of Bonnie’s room, so it’s up to Woody and the gang to create a tropical paradise right there. I love that aloha spirit! (And I love hedgehog’s peanut shell bikini top!)
I’m so glad to be seeing more Hawaiian references, especially in the Midwest.
May you have a week full of warm alohas and let’s have fun!
Lei a lei’a!﻿
By Holly Nagel|2012-07-22T12:01:13+00:00March 9th, 2011|Seconds to Sanity™: Travel & Event Planning|Comments Off on Hawaii sightings