Is that SMILE real or fake? It’s in the eyes and here’s why!

Is that SMILE real or fake? It’s in the eyes and here’s why!

How can we tell if a smile is real or fake? Yes, yes, it’s in the eyes, but WHY?

Only when I began delving deeper into SMILES did I learn the reason why it’s all in the eyes!

In the 19th century French neurologist Guilluame Duchenne’s research showed that there were two sets of muscles controlling a smile AND they are opereated by two separate parts of the brain–the motor cortex and the limbic system.

The motor cortex controls the zygomatic major muscle (which raises the corners of the mouth) and the limbic system (the emotional center) controls the orbicularis oculi (which raises the cheeks and forms crow’s feet around the eyes). The muscle at the corners of the mouth can be voluntarily moved, like when we force a smile as we get a photo taken, however the muscles around the eyes are controlled by our emotions, spontaneously. 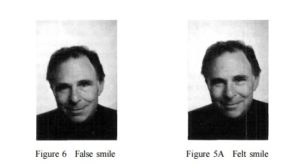 Often the authentic smile, or Duchenne smile, will have crinkles at the eyes, the eyes squint a bit, and the eyebrow is pulled down.

Here’s a pic of psychologist Paul Ekman from his book “Telling Lies” (p.159) originally published back in 1985. The book is full of useful information. Here its a bit hard to see, but his eyes definitely tell it.

Smiles also indicate other things. Do YOU know what they are?