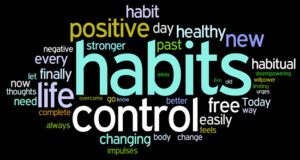 Seems rather obvious, doesn’t it?

Habits are supposed to be, well, habitual, something done with regularity of some sort – daily, weekly, bi-weekly. However I know I have gotten discouraged when I had started a new “habit” and didn’t keep it going.

My eyes were opened with two simple encounters.

The first was when my toddler son was at his regular check up. This was during his ‘orange’ phase. He would only eat orange things like carrots (hooray) and gold fish crackers (well, okay) and mandarin oranges (hooray). I voiced concern over my boy getting appropriate nutrition and the doctor said as long as he is meeting those nutritional requirements in the long run, I shouldn’t fret about it on a daily basis. He further explained most people, let alone toddlers, don’t eat their daily requirements of various foods each and every day, but rather, it is an accumulation of eating well over a period of time.

The second time my eyes were opened was when I saw health and fitness guru Richard Simmons say “Never say diet, say live-it!” (He also has a book, The Never Say Diet Book). And I thought YES, a live-it, after all it’s a way of living, it should be a way of life.

Whether it is eating nutritionally, exercising, or any other positive ritual, I learned to make it a way of life. And, in fact, endeavor to make many things I find important a way of life. Reading, studying, creating, praying.

Afterall, as Aristotle said, We are what we repeatedly do.

As a human with accompanying foibles, I figure (reason? rationalize?) I may fall off the good habit wagon every once in awhile. I’m not always fulfilling my daily goals, but I do reach them most of the time. And that has been the key to making good habits stick for me. Doing it most of the time.