Sandi Sylver: Finding Her Own Voice(s)!

Sandi Sylver: Finding Her Own Voice(s)! 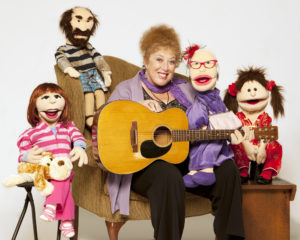 Sandi is as colorful as the lovely flowing silks she wears. Reinvention is nothing new to her and around age 55 (merely ten years ago!) she did it again and began her journey as a ventriloquist whereby she travels the country entertaining children, families and adults with her various programs. Music and telling are in her blood and she has entertained as a folk singer in Greenwich Village in the 60’s and even appeared on the Gong Show (Yes, this is true. I saw the episode myself!). Moss will never grow beneath her feet as she continues to reach for the sky and it is with a twinkle and a bow that I introduce her to you here!
Holly:   What would you call yourself and what you do?
Sandi:   I bill myself as Sandi Sylver: Storyteller-Ventriloquist-Songstress, and that about says it all.  I get miffed when someone calls me a “puppeteer” and/or I put on “puppet shows,” because that’s not a VENTRILOQUIST.  My audience is preK to 8th grade, families, and grownups.
Holly:   What area do you reside and/ or work?
Sandi:   North Aurora, Illinois is my home, and I currently work throughout the Midwest, California, Nevada, North Carolina, Virginia and Maryland. Next fall, I’ll be performing throughout North and South Dakota, Wyoming, Idaho, Kansas, and the western part of Wisconsin.
Holly:   How long has it taken you to get to the level you’re at now? What has been involved?
Sandi:   I started reinventing myself as a storyteller and ventriloquist in 2002.  With a background as a “folkie” in the ’60’s and 70’s, even though I hadn’t been playing guitar or singing in 20 years, I started doing that again.  Then, I went to the library and got-a-teach- yourself-to-be-a ventriloquist book, and, believe me practiced, a lot!  I also went out to hear other storytellers as often as I could.  I quit “the job from hell” and lived off my savings, plus to supplement that, I got a very part-time job that payed very well.  I worked very, very, very hard to get work–it was more difficult then because I didn’t have much computer knowledge.
Holly:   Who in particular or in general has helped you grow in your avocation to become who you are today compared to when you began?
Sandi:   There are too many people to name who have befriended me and mentored me.  But, without question, there are a few that must be noted here: In my earliest years, Jenny Phelps, a now retired librarian, put me in a position in Southern California to get my toe in the door of the Santa Barbara Library System;  Grace Fujii opened library doors for me in Reno, Nevada; and Caroline Potter did the same, in Marin County, California. Locally, storytellers Sue Black and Linda Gorham were very helpful and kind mentors in my earliest days.
Holly:   What critical decisions did you have to make along the way to becoming who you are today? along that idea, What are some of the major challenges you face or have faced?
Sandi:   Since there were so many brilliant, established storytellers in the Chicago area, and because I like to travel, I knew from day one that I wanted to build my career nationally as well as locally.  At this point in time, the most major challenge is the economy.
Holly:   What mistakes have you made or lessons have you learned?
Sandi:   Now, that’s a question that could take months to completely answer!
Holly:   How do you balance your professional and personal life?
Sandi:   I really don’t have much of a personal life!
Holly:   What people have you looked up to, respected, and/or admired?
Sandi:   First off is ventriloquist Shari Lewis–not only as a vent, but as a woman, period (Google her on Wikipedia–she was truly a pioneer for women in entertainment); Bonnie Raitt, who has always known who she is, where she wanted to go, and later on, how she could use her fame to help others (and has acted accordingly); Richie Heisler, New York actor, musician, and playwrite, who I first met in 1966 who, to this day, lives his creative life as he always said he would.  Also, the late Sylvia Jampol, a magnificent and generous friend, a larger than life woman who was like a cross between Bette Midler and Bella Abzug. And to round it off, another friend, the late Gail Pollock, who fought a 20 year cancer battle and, like the little engine who could, just kept going and going, regardless of the challenges.
Holly:   How do you refresh, recharge and stay motivated?
Sandi:   I like to go to hear other storytellers and musicians.  For motivation, I look at my bank statement.
Holly:   What inspires you?
Sandi:   Originality; people with good hearts; people who face life’s obstacles with grace and determination; my rescued dog, Apache, my first and forever dog….really, that’s another one of those questions that could take days to answer.
Holly:   What advice might you have to someone starting out in your profession/ avocation?
Sandi:   Do your homework.  Pay attention.  Be nice.
Holly:   In what ways do you develop awareness of your business?
Sandi:   Talking/networking with other performers is best for me.
Holly:   Have you ever had a particularly funny or embarrassing moment, and if so, please share it!
Sandi:   The most embarrassing thing is that I still don’t have a new website up!  But as far as an embarrassing/funny performance moment, I’d say it was the time I tripped going up onto the stage, spilled my bottle of water all over myself as well as a few in the audience (the cap wasn’t on tightly enough), a puppet went flying, and an inappropriate word came out of me–thankfully my mic wasn’t on yet.
Please visit her site at:
sandisylver.com
By Holly Nagel|2014-01-15T23:36:01+00:00September 30th, 2012|Seconds to Sanity™: Travel & Event Planning|Comments Off on Sandi Sylver: Finding Her Own Voice(s)!